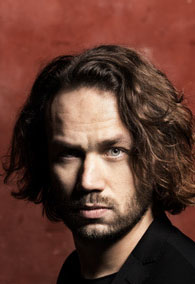 Elmer Bäck was born in Helsinki, Finland in 1981. He graduated from The Theatre Academy of Finland in 2007 and thereafter spent 7 years living in Berlin, Germany working with the theatre-group Nya Rampen. Together with Nya Rampen, alongside director Markus Öhrn and the Swedish group Institutet, he played some of the world´s most renowned theatre festivals, among them Avignon, Berliner Theatertreffen, Wiener Festwochen and Festival TransAmériques (Montréal).
His big break in film came in 2015 with the title role of Sergei Eisenstein in the film “Eisenstein in Guanajuato”, directed by acclaimed director Peter Greenaway. He has also been working regularly in film and tv in his native Finland, with the tv-series “Jättekiva” by Niklas Lindgren and the film “Viimeiset” by director Veiko Öunpuu to name a couple.
Elmer Bäck is fluent in Finnish, Swedish, English, German and Spanish.